A new narrative for the post-carbon era

We don’t think today’s industrial framework can continue as before. But what comes next? Some are exploring new forms of capitalism. Jyoti Banerjee explores the post-carbon framework laid out in Jeremy Rifkin’s Third Industrial Revolution.

Our industrial civilisation is at a crossroads. Oil and other fossil fuel energies that make up our industrial way of life are sunsetting, and the technologies made from and propelled by these energies are antiquated. The entire industrial infrastructure built on the back of fossil fuels is aging and in disrepair. The result is that unemployment is rising to dangerous levels all over the world.

Governments, businesses and consumers are awash in debt, and living standards are plummeting. A record one billion humans face hunger and starvation.  Worse, climate change from fossil fuel-based industrial activity looms on the horizon – cataclysmic change in the temperature and chemistry of the planet.

This is the setting for Jeremy Rikfin’s key proposition in his book, Third Industrial Revolution: How Lateral Power is Transforming Energy, the Economy and the World – “Great economic revolutions occur when new communications technologies converge with new energy systems.”

How can we understand these elements of a revolution? Energy systems make possible the creation of more interdependent economic activity and expanded economic exchange, and facilitate more dense and inclusive social relationships.  On the other hand, a communications revolution provides the means to organise the manage the new temporal and spatial dynamics that arise from new energy systems.

Rifkin’s vision of a Third Industrial Revolution is based on the meeting of two key revolution components: Internet technologies plus renewables. But what would this look like? Hundreds of millions of people will produce their own renewable energy in homes, offices and factories and share it with each other in an “energy internet.”

If Rifkin is right, the implication would be a fundamental re-ordering of human relationships: how we conduct business, govern society, educate our children and engage in civic life.

But would a move to renewables and collaborative communications technologies really result in a different world? Check out this table below to get a sense of what the changes could be. 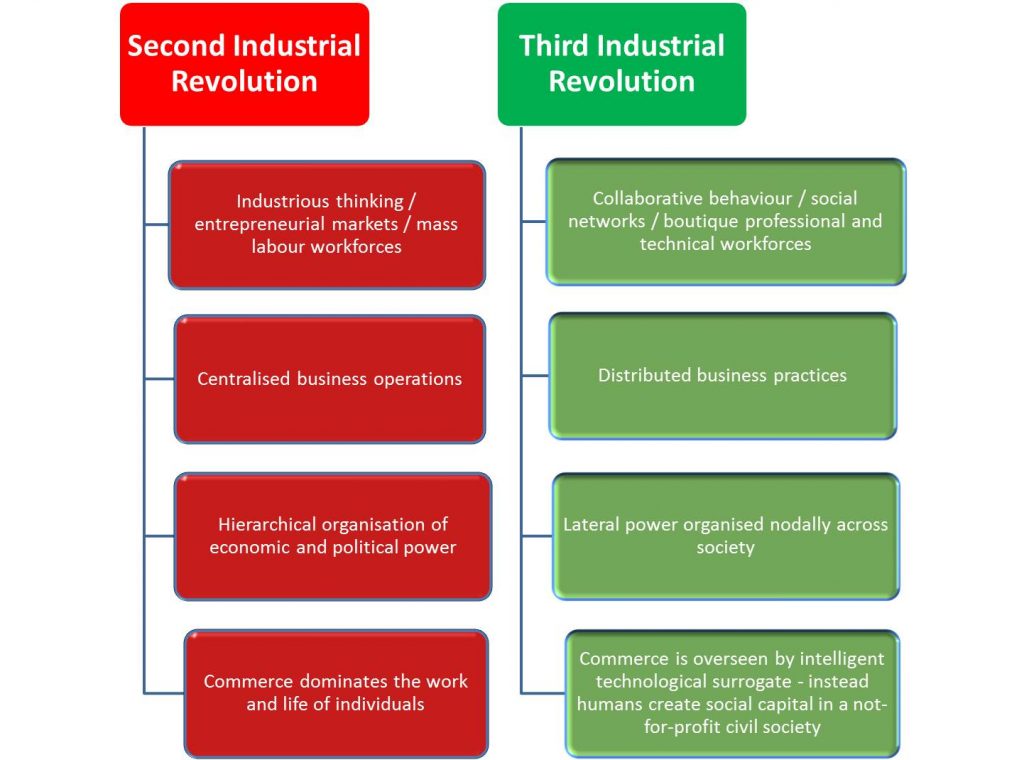 What Rifkin’s model does is enable the creation of a narrative for what the next industrial revolution can look like. This is important because there is deep dis-satisfaction with the status quo but very little insight as to what the next generation of human relationships (and, therefore, business relationships) can look like. What Rifkin is saying is that the new forms of communication – already flourishing in the form of mobile and social media – become the medium for organising and managing the more complex civilisations made possible by the new forms of energy. The infrastructure that emerges annihilates time and shrinks space, connecting people and markets in more diverse economic relations.

Infrastructure used to be thought of as a static set of building blocks that serve as a kind of fixed foundation for economic activity. Instead, in this new model, infrastructure should be thought of as an organic relationship between communications technologies and energy sources that, together, create a living economy. Rifkin renders it thus: “Communications technology would be the nervous system that oversees, co-ordinates, and manages the economic organism, while energy is the blood that circulates in the body politic, providing the nourishment needed to convert nature’s endowment into goods and services to keep the economy alive and growing. in effect, infrastructure is a living system that brings increasing numbers of people together in more complex economic and social relationships.”

The role of communications

The implications for business are huge.

In the post-carbon era, hundreds of millions of human beings will be generating their own green energy in their homes, offices and factories and sharing it with one another across intelligent distributed electricity networks – an intergrid – just like people now create their own information and share it across the Internet.

Our businesses are not built this way. Typically, they are organisms constructed around centralised power. Yet, we have seen numerous examples of how distributed power (what Rifkin calls lateral power) can overwhelm centralised power. Look at how music sharing is devastating the music industry, or how Wikipedia’s crowd wisdom dismantled the ivory tower knowledge of Encyclopedia Britannica.

We can already see that the conventional top-down organisation of society that characterised much of the social, economic and political life of the fossil fuel-based industrial revolutions is giving way to distributed and collaborative relationships in the emerging green industrial era. But this is not enough. For the Third Industrial Revolution to take hold, Rifkin recognises that a number of other shifts need to take place simultaneously:

The Third Industrial Revolution has not taken place as yet. Some of its elements, such as collaborative democratic communications, are already in place, Others, such as levelling the energy playing ground so that renewables get the impetus they need, would need a considerable degree of political design and technological innovation. But what is clear is that a narrative exists that can help organisations decipher the failing structures of today, and which enables them to prepare for a different world order.

Just re-inventing capitalism is too limited a view to deliver this.